Child #1:  (Julieanne Terlinden) Miss Copley, I'd like to borrow this book, please.

Lucy:  (looks it over critically, then nods approvingly.)  Yes, this is a good book for you.  Sign the card and take good care of it.  You can have it for a week.  Next?

Child #2:  (Oliver Terlinden) Miss Copley, I'd like to borrow this book, please.

Lucy:  (Looks it over, shakes her head.)  This book is not for children and you know that.  I'm going to talk to your mother when I see her in church on Sunday.  There are plenty of nice books—you have no business trying to check out this one.  Tom Sawyer is no book for children!

Lucy:  Hello, everyone.  I'm the librarian here at the cemetery.  I was buried here after I died in 1942, and then my sister had me re-buried in at Greenwood in town, but I always liked it here.  This is where my spirit lives.  I like the quiet.  While I was living, I was the president of the Glass Valley Cemetery Association and kept the records for this place.  It's a beautiful spot.

You might think the people buried here are quiet.  But you're wrong about that.  Just listen.

Ransom Copley:  (Mike Blackie Olson) I'm Ransom Copley.  I was born in New York state in 1806.  My wife Maria and I moved here in the late 1850s.  Very few people know this about me, but my grandfather was awakened one night in 1775.  April 18, 1775, to be exact.  By Paul Revere!  That's right!  He came past, yelling about the British coming, and my grandfather marched out with his militia there in Massachusetts the next day.  That was the day of the shot heard around the world, the beginning of the Revolutionary War.

Lucy:  That's enough, Mr. Copley.  Maybe these people haven't heard that story, but we here in the cemetery certainly have.  Let's let someone else talk.  Lydia?

Lydia Copley:  Janet Huppert) Ransom and Maria Copley are my parents.  I'm glad I could be buried here near them.  My mother was such a kind woman, and strong.  She outlived my father by several years.  Even went to Minneapolis for a while and lived there!  I had to be strong, too.  I had four sons, and I thought the world of them.  They were strong and funny.  Oh, the joking they did!  Such teases!

It's good to be here, in the same cemetery with the boys. Kind of like back in the old days on the farm.

Noise in the back—Lucy:  (Stands up, shakes finger, shushes)  Quiet, please.  (Turning to Lydia) My goodness, Aunt Lydia, you've been through a lot.  I'd like to hear from John S. Copley now.  I have a special relationship with him—he's my father!  Dad, will you talk to us now?

John S. Copley:  (Jerome Rodewald) Why, yes, Lucy, I will.  As you know, I was born in New York state, in 1830.  I married the girl next door, my sweet Maria, when I was 23.  I learned the blacksmith trade and I taught school for a while.  But I kept hearing about Wisconsin and how the land was so rich, and a man could buy a farm for a lot less than he could in New York.

Maria was about the most adventuresome wife anyone ever had, and she said we should give it a try.  So we came out and bought a farm, forty acres at first, but we kept buying more as we could and eventually we had five hundred acres!  A few years after that, my mom and dad came out.  I opened a blacksmith shop.  That was a good business in new country.  We all had to break out and clear our land, and the plows and chains and what-have-you were breaking all the time.  I met all the neighbors that way, doing blacksmith work.

Later, when I ran for town board chair, it was easy to get the votes.  Everyone knew me!

They knew me in another way as well—a much sadder way.  I was the coroner for thirty years.  Just after their deaths, I visited several of my neighbors who are buried here.  I saw some things I would rather not have seen, but I always tried to be a comfort and an honest observer.

Well, anyway, Maria and I farmed and raised livestock.  I'll tell you--

John S (continuing on, refusing to be interrupted)  I'll tell you what was NOT easy, and that is getting a fair price as a farmer!

Lucy gives up, puts her hands over her face in resignation.

John S:  I'll TELL you why!  The Panic of 1873.  It all started in the 1860s when the U.S. Government issued greenbacks, paper money, that was based on the gold and silver supply.  Germany also based its money on gold and silver.  But then they decided to just base the value of their money on gold, which made silver cheaper.  So American money, the greenback, was worth less than it had been.  That's called inflation!

On top of that, bigwigs out east had been cheating and made too many loans that weren't backed up.  So the big investment houses failed.  So banks failed.  There wasn't money for farmers to borrow to buy seed and equipment for their next crop.  America's productivity fell by TWENTY-FOUR PERCENT!

John S:  (continuing):  Oliver Kelly!  Have you heard of him?  Historical Kelly farm in Minnesota?  He started an organization called The Grange.  Patrons of Husbandry.  I joined that and was active in it for years.  It just wasn't fair, how farmers were being treated.  It cost us as much as ever to raise a crop, but we got paid less, and taxed more!  Oh, it just burns me still.  Farmers and workers lost their livelihoods, but the big guys got richer.  By 1890, 71% of the wealth of this nation was concentrated in the hands of less than NINE PERCENT of the the public.  Doesn't that just get your goat?

Lucy:  Well, thank you, Dad, that was very informative.  You just take a little rest now, ok?  And the rest of you, please be quiet.  Don't tell him that it's even worse now!  The richest one percent in the United states now own more wealth than the bottom ninety percent.  Just because I'm dead doesn't mean I don't keep up with things.  Shhhh.

(Turning to Kate):  Kate, would you like to say something here?

Kate:  (Maureen Ash) Well, yes, Lucy, but I didn't have a very interesting life, I'm afraid.  I was born here, like you.  We're sisters, I don't know if everyone is aware of that.  I guess I'd like to ask you a few questions.  May I?

Lucy (flustered):  Well, I....I suppose so.  Goodness, Kate, I didn't have an interesting life at all!

Kate:  Well, let us be the judge of that.  First of all, when were you born?

Lucy:  You know very well that I was born in 1867.  Same year as Laura Ingalls Wilder, matter of fact!  I always enjoyed getting children interested in her books.

Kate:  Now, Lucy, you were a teacher for a while.

Lucy:  Yes, I taught at Pierce Valley School.  I enjoyed that job.

Kate:  And you never married.

Lucy:  That's true.  You know I was always kind of independent.

Kate:  Yes, that is true.  I remember how happy you were when women finally got the vote in 1921!

Lucy:  It is a disgrace that I had to wait till I was fifty-four years old to cast a vote!  I certainly was considered capable of paying taxes for all of my adult life.  But not to vote!

Kate:  Well, I agree with you.  But I want to talk about your job at the library.

Lucy:  Well, it wasn't technically a job at the library.  River Falls didn't support a library per se.  It was just a corner of city hall, which is a pretty grand name for that little building on Elm Street.  There was a bathroom for the public, and I was hired to keep that clean.  There were books in a corner of city hall, and I took charge of checking them in and out.  There were 454 books.  I wasn't paid for that part of the job.  Just for keeping the bathroom clean.

Kate:  That was what year?

Lucy:  (continuing)  Dad died and I moved to town.  I bought a house on Cascade Avenue and took in boarders.  That and the librarian/bathroom cleaner job kept me solvent.  I was the librarian in River Falls for fifteen years.  By the time I retired, in the late 1930s, there were more than 4000 books, and our annual circulation exceeded 30,000.  Not that I'm bragging.

Kate:  Well, you could brag.  You did a good job.  I'm going to read something from a book called Kinnickinnic Years, by John James Prucha and Norman Arthur Foss.

Lucy:  What?  Those hooligans wrote a book?

Kate:  (reading)  “Miss Lucy Copley served the citizens of River Falls for fifteen years.  She retired from her job in January, 1939, and it is no exaggeration to suggest that she was missed by every person who ever drew out a book from her little bastion of knowledge and literacy.”

Lucy:  (Sniffling, trying to hide it)  Oh, for goodness sakes.

Kate:  I remember finding you in your room on Christmas Eve in 1942.  You looked so peaceful.

Lucy:  You lived on, Kate.  You took care of everyone you ever met.  You were the last of the Copleys in River Falls.

Ransom, John S, Kate, Lucy all standing:  We did our best.  Now it's your turn! 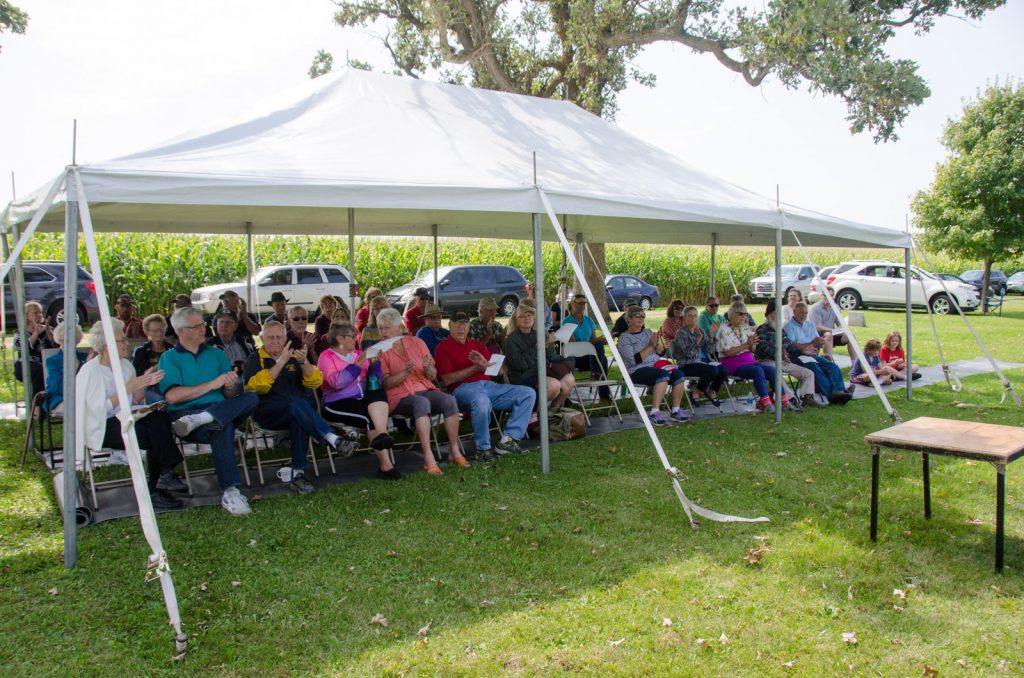 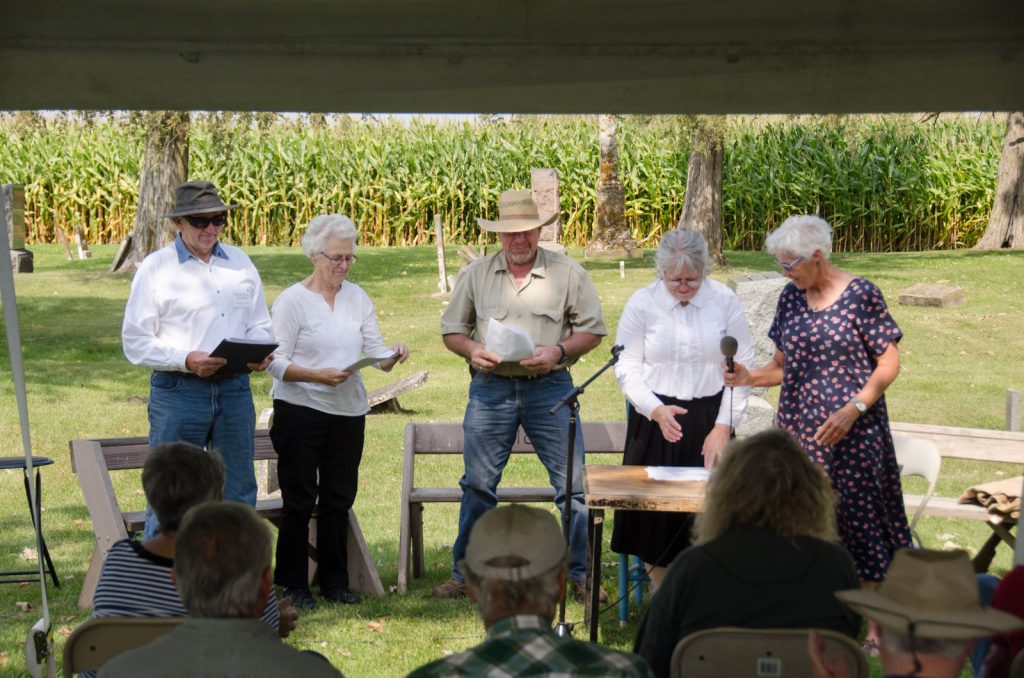