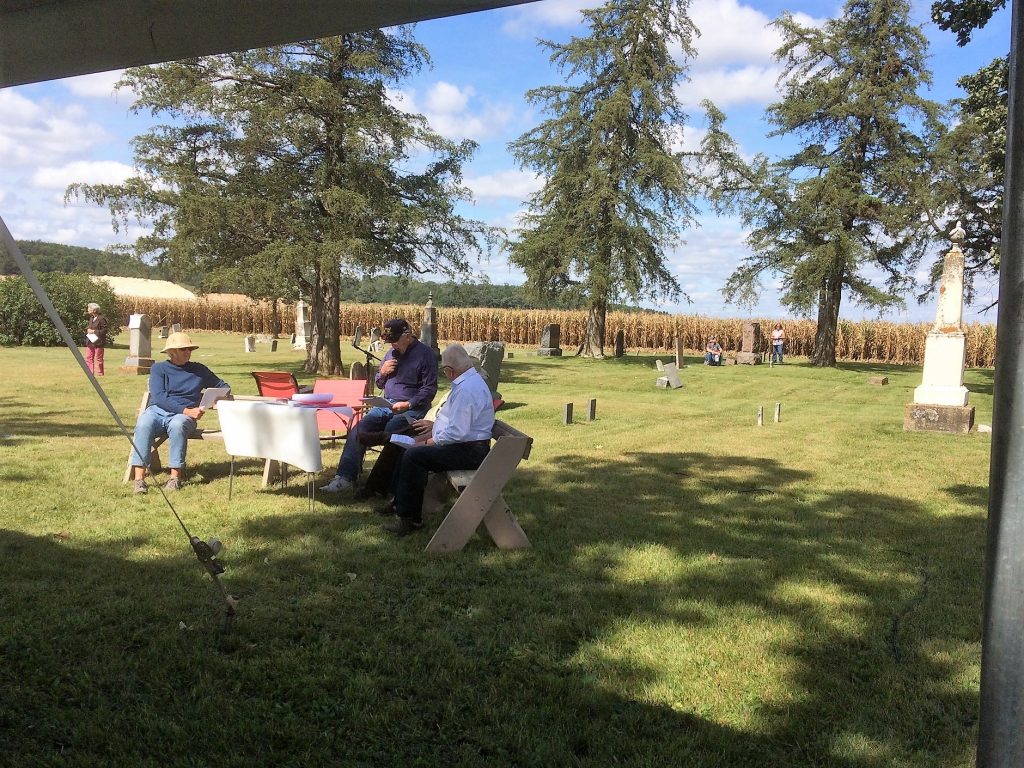 The 2018 Glass Valley Cemetery Walk was a huge success.  About 35 people attended including Patricia Mory from the Pierce County Historical Society.  The weather was perfect.  Volunteers read the story of the Webster Family who homesteaded the land and sold one acre for the Cemetery.

For thousands of years, people lived in this area.  They built their villages near creeks and streams and fast-flowing small rivers so they'd have a source of water in the winter.  They hunted and fished and gathered berries and plants for food and medicine.  They were like us—they loved their families and friends and the land where they lived.

Just as we have cemeteries, they had places to bury their dead.  There are a lot of different theories on this, but one of them is that the Woodland people, also called the Oneota, lived here until about six hundred years ago.  They built earthen mounds, which they used as burial grounds.  There's one at the confluence of the Kinnickinnic and St. Croix Rivers, just inside Kinnickinnic State Park.  It matches a mound in Fairview Cemetery in Stillwater.

The Dakota people lived here after the Woodland people moved on.  They also used mounds for burial, but they first raised their dead, wrapped tightly in blankets, on scaffolds and left them for up to two years.

We honor the dead here in Glass Valley cemetery, even though we didn't know most of them.  We honor those who were here long before any of our ancestors were here.  And we hope those who live after us will know we cared for the land and wanted them to have good lives, too.”

Enter—Polly Webster:  “Oh, for goodness sakes.  I didn't know we'd be having company!  Well, come on in.  Don't bother wiping your feet.  I've heard of this cemetery play.  It's nice to know you modern folks have the time and energy to think about us.  We've been dead for so long!  But we were alive once, just as you are, and I for one am glad to be able to tell you a thing or two about what that was like!

“I'm Polly Webster.  A few years ago at one of these events, you met my aunt Sally, Sally Glass.  She came out later.  But first I came out here with my husband, Milton Webster.  We lived in Hanover, New York, same as Aunt Sally and Uncle Cyrus.  The soils were played out, people had shot out all the game, made the streams filthy by cutting down the forests so the soil eroded into the water and wrecked the fishing, and we heard about how nice it was out here.    Fresh land, clean water.  It sounded perfect.”

Milton Webster enters:  “Now, I wasn't so sure, but Polly thought it was a good idea.  And she talked me into it.”

Polly:  “Milton, you know you wanted to come.  Stop being silly.”

Milton:  “Silly!  Oh, Polly, you still make me laugh, all these years later.  I was just lucky, finding a spunky girl like you.”

Polly:  “Well, I was never a shrinking violet.  I guess that's another reason I wanted to come west.”

Milton:  “Remember when we went to buy the land and you bought your own parcel, next to mine?  The agent couldn't believe it.”

Polly:  (Laughing)  “Yes, that was funny.  Kind of.  But it still burns me.  Wisconsin would have become a state two years earlier, in 1846, but there was wording in the constitution being voted on that would have allowed women to have property rights.  And sixty percent of the men—of course just men could vote then—would not accept that.  The measure failed.  They had to wait and bring it up again, in 1848, and they conveniently left that little part of the constitution out this time, so it passed!”

Milton:  “We told that land agent that the laws governing homesteads allowed a woman to own land.  I think he wasn't a big reader, or he might have challenged me on it.  I was ready to quote chapter and verse to him, though—Section 52, Chapter 102, Revised Statutes of 1849!  All it said was that a husband needs the signature of his wife to sell his land, but he didn't need to know that.

Polly: “I wanted to own my own land.  I'm glad Milton supported me in that. Really, we owned it together—everything we had went into the same pot, so to speak.  We were glad to let people start burying their dead on that little part of it.  It was next to the road, nice and flat, not so hard to dig a grave with a shovel, and near where people were starting to meet for school and church.  We were lucky enough that our children lived.  So many people didn't have that blessing.  Letting them use a bit of our land was the least we could do.”

Narrator:  These people were buried on the Webster's land before it was officially a cemetery.

Edward Hammond:  “My baby daughter is buried here, along with three other of my wife Sarena's and my babies.  Little Ella died, 22 days old, in February 1859.”

Mrs. Woodburn:  “My daughter Alice died at three months and 22 days.  She was just starting to smile and jabber.  We buried her here.”

Ella Proctor:  “I'm Ella Proctor.  I hated dying.  I was only eight years old and I wanted to grow up and be a teacher.  But I was buried here instead.”

Nancy Proctor:  “I'm Ella's mother, Nancy Proctor.  I tried living onward after Ella died.  But losing her took something out of me, and when I got sick, maybe I didn't try as hard as I could have to survive.  I'm buried here, too.  I was first to be buried here after the cemetery was incorporated.”

John Webster:  “I'm Polly's son, John Webster.  By 1863 my parents had passed their land to me.  They and I agreed that it was best to sell the part of it that was already being used as a burial ground to the community as a place to bury our dead.  There were enough sad stories and tears soaked into it already.  For twenty-five dollars I sold just over an acre to be used as a cemetery.”

John Webster:  “My mother and my father and I are all agreed—we want to sell a piece of land to the community to be used as a cemetery.”

Matthew Proctor:  “I know we all appreciate that, John.  Seems like everyone here has lost someone, and much as we wish otherwise, we are all going to need a place for final rest ourselves.  I propose we call this group the Greenwood Valley Cemetery Association.  And I nominate Hosea Bates to be chairman.”

Narrator:  “The cemetery might have been called Greenwood Valley Cemetery, but it wasn't long before people referred to it as Glass Valley Cemetery.  The Glass family owned so much of the land in the area, the whole valley took on their name.

The association sold their first official lots at that first meeting.  They set out rules governing the cemetery, such as how the lots would be arranged and what they would cost.  They had it fenced, and they made sure there was a good, strong hitching rack for horses and teams so people wouldn't tie their animals to the fence.

The little cemetery absorbed the bodies and the tears of those early settlers.  Gradually people began burying their dead elsewhere.  The last lot was sold in 1936.  Some of the graves were drifted over by dirt during the great Dust Bowl of the thirties.  Weeds and sumac took over the cemetery.  It became an eyesore.

In 1946, something happened to start to change this.”

Narrator:  “In April of 1948, just two months before the death of Mr Hickok, at age 90, the town of River Falls agreed to take over the cemetery.

“Things didn't change right away.  But in 1957 the Town and Country 4-H Club took over the maintenance of the cemetery.  The young people and their parents worked hard to dig up the sumac roots, encourage the growth of grass, fix the toppled and broken tombstones, and make it a place of respect for the people who were buried there.

“The club is still taking responsibility for keeping up the cemetery.  It's beautiful to drive past here on a summer evening and see a family or two here, mowing, weeding, or just walking around and looking at the headstones, learning about the history of our area.  Thank you, pioneers, and thank you, Town and Country 4-H club.